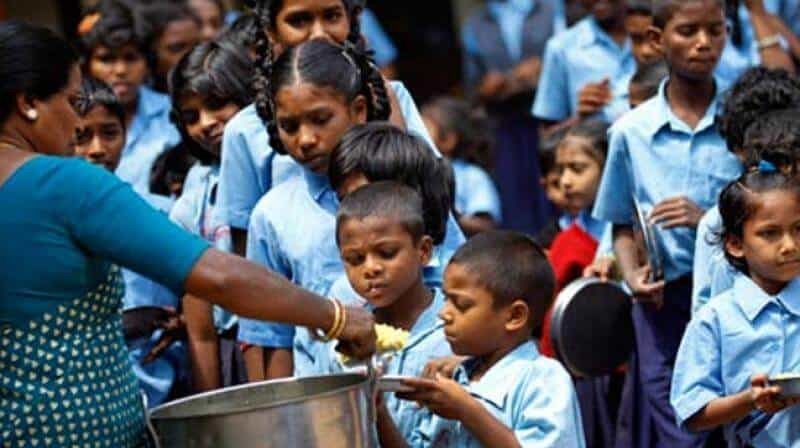 Mid day meal scheme is a nationwide school program implemented by the government of India with a keen focus on developing the nutritional status of every school-aged child in government and government-aided primary and upper primary schools. The major goal was to ensure hunger didn’t stop children from attending the school. Improving the enrollment, reducing dropouts, maintaining the regularity of students in schools and strengthen the women through literacy were a few additional objectives of this program. It seemed to be one of the largest school feeding programs in the world which fed over 120 million children daily. It was on 14th August 1995, the centrally sponsored scheme named National Program of Nutritional Support to Primary Education (NP-NSPE) was launched in India.  Initially, the project was implemented in 2048 blocks of the country and in three years it extended to all the blocks of the nation. Supreme court through a provision in 2001, made it compulsory to serve free lunch with a minimum content of 300 calories and 8-12 grams of protein for a minimum of 200 days to all the school-aged students in various government and government-aided schools, Education Guarantee Scheme (EGI), Alternative Innovative Education Centers (AIEC) and in schools which supported by Sarva Siksha Abhiyan (SSA) and those run by Ministry of Labor.  The complete requirement of the food grains for this program is met through the fund provided by the Central Government.

In the pre-independence era as well, British administration had implemented Mid day meal program in 1925 in Madras Corporation.  Later it spreads to various states of India, starting from Tamilnadu to many other states and by 1990’s the government of India adopted the scheme across the whole nation. In the beginning, only primary school children were included in the scheme and it was expanded in 2007 by incorporating the upper primary schools, Education Guarantee Scheme (EGI), Alternative Innovative Education Centers (AIEC) like Madrasas and Maqtabs sustained under SSA to the margin of this scheme. The name is also changed to ‘National program of Midday meals’ from ‘National Program for Nutritional Support to Primary Education’. Apart from providing cooked food, many states were also offered up to 3 kilograms of wheat or rice to the students with maximum attendance.  The cost of mid day meal scheme is shared by both the central and state governments. National, state, municipal, block, village and school levels of committees have been formed to examine the functioning of the Midday Meal Program. To provide the cooked meal to the elementary school children, around 25.5 lakh cook cum helpers from SC/ST/ OBC communities have been arranged and around 5.77 lakh of kitchen cum store have been constructed to ensure hygienic meals for the students.

The Mid day meal scheme program has now become a huge success across the nation.  It brought significant change in the lives of millions of children by ensuring the availability of nutritional food for at least every working day. Improving the literacy level of children and socialization of various disadvantaged sections like Adivasis, Dalits and women are some of the major gains of this project.